Market is one of the most important issues in the economy. The market related ideas have changed at different times. Concepts of commodity markets, currency markets, labor market etc. are also the emergence of the economy. In this continuation, at present, the ‘free market economy’ as the world market regulator has taken the place of discussion. Although the market system has both positive and negative discussions and criticism, the idea of the democratic world has been accepted. 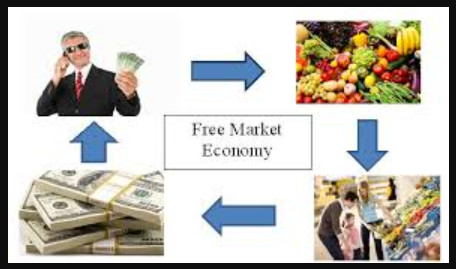 What is the free market economy?

Free market economy is a market system whereby the government can get rid of the restrictions and make their own financial decisions and achieve maximum profit. Some people also call it a capitalist economy. In this process, the special rights of personal property are preserved. The main component of the free market economy is the purchaser’s own right to purchase goods. Right Again, ensuring the participation of all parties related to the production of goods and labor and the production of business in Katamo. Due to no government control or obligations, business groups are interested in creative and productive businesses. Due to competition and market competition in the market, due to the imbalance of demand and supply, the free market economy originated.

Market economy emerged from its involvement with production and exchange. Modern and modified form of market economy is the free market economy. At the beginning of market development, the ruling party or government strictly controlled the market in different ways. By the end of the eighteenth century, government control free trade was allowed as a way to get rid of this control by passing a proposal called ‘Allow to do’. This activity gradually plays an important role in promoting trade and commerce. In the nineteenth century, the concept of free market took place in Europe known as Laissez faire policy. Later, the concept of ‘Free Enterprise Economy’ worldwide was appreciated. In 1983, the open market economy system was introduced in Bangladesh.

The nature of the free market economy: In the open market economy, the quality of the country, the purchase and sale of the products are determined according to the market. In this system, the general public must be engaged as a consumer, labor and investor. The production is affected by consumers’ desire to purchase. The investor or organization itself decides and the workers themselves find work. The market is the center for investment in goods and services. The market is controlled through competition based on the demand and supply of products and services produced. In the concept of free market, a person can claim higher returns due to his/her skill. In this process, the government does not directly control the market, but the government maintains and makes laws to protect the interests of all concerned.

Concept of product in the open market economy: Business is the only attempt to maximize profits. This profit is achieved in the right market of the free market and the consumer is also benefited. The parties involved in production in the free market system are considered as independent. Even all the issues related to production are fully evaluated. In this case, the owner, labor, labor, talent, efficiency, everything is judged at market value or value. Labor, talent, competence etc. are important issues but it is denied in the free market system. The person who does not have any money is not considered as labor. So, in this capitalist economy, women’s work in the household, child bearing and upkeep, various tasks of home management are considered as unproductive labor. Although it is very important for civilization.

In today’s world free market system is recognized as a modern and ideal system. Due to the availability of goods based on demand and supply, more products are available in the market. As a result, the buyer can pick and buy the product according to his own preferences. Due to competitive market, the prices of goods are also low. In this process the consumer’s satisfaction is increased and consumer rights are preserved. The free market system is in favor of consumers. The maximum use of labor or technical skills is ensured because everything is considered to be a value scale. Modern technology is used efficiently. In this process, owners, workers, businessmen, organizers, officials, employees, consumers all enjoy their freedom in product planning, selection or choice. Because of the lack of government control, everyone is able to do their own work independently.

There is a circulation of free market economy in the whole world. It is also called democratic market system. But there are also negative aspects of the development of developed countries due to the different democratic customs and behavior of the developing countries. Because of this, the market is expanded due to the expansion of trade and commerce beyond the specified geographical boundaries. As a result, the product quality of the developed country occupies the top position. Domestic companies can not survive in competition with developed countries. As a result, domestic companies have been threatened and multinationals dominate the world’s monopoly. As a result, local factory is closed. Thousands of workers become unemployed National buyers are affected due to foreign buyers being attracted to foreign products Multinational companies using advanced countries as a strategy to capture the market.

Public opinion evaluation of the free market economy: Due to the destruction of indigenous art and unemployment, many of them feel unacceptable. But there is such fear, but in the free market system, the quality of the products increases due to international competition in the domestic market. If the quality of domestic products is good in the international market, then the reputation of the country increases. The biggest example of clothing in Bangladesh. This method is also acceptable to most people due to the increase in international investment.

In the context of globalization, the contribution of the free market economy to the production of quality products and consumer satisfaction is undeniable. Muktabajar contributed to create quality opportunities for local products and to offer domestic product to the international market. There is no alternative to free market economy to save the balance of national economy and increase the domestic and foreign investment. So this system is widely accepted today in the world.