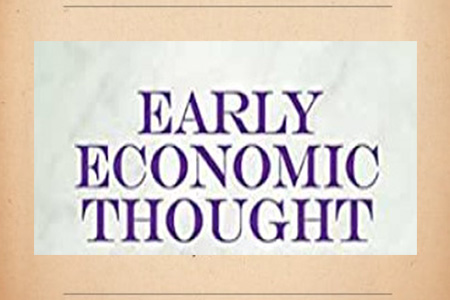 Though of ancient economy contemporary of Chinese, Persian, Mesopotamia, Romak, Greek and Arab civilization. Among the ancient writers of economic thought are Chanqya, Aristrotol, kin Si Huang, Tomas Ekinas, Ibn Khaldun. In the 14th century to 17th century Josef Sumpetar considered the wise people of the period have considered ‘’the founder of more scientific economics than the incoming parties’’ as well as to develop financial interest rates and valuation with natural law .After the discovery of Ibn khalduns al Muqaddimah has described Sump tar Ibn khaldun as the closest expert in modern economy .But many of his economic theories are unknown to Europe until today.

The other two parties which are later called mercantile and realistic and they have a direct impact on the remaining development of the economy. Both sides agreed with the rise of economic nationalism and modernism of Europe in Europe. Mercantilism, which was known as productive policy literery  economic theory from the 16th century to the 18th century .In the theory the wealth of a nation depends on their collected silver .A nation can collect silver by creating a hindrance on imports of foreign goods and other products other than gold and silver if not from a mine .This principle is encouraging the import Soft cheap glasses for exportable products and the policy of imposing duty on foreign products and stooping production in colonies in state policy.

A groups of 18th century thinkers and writers develop thinking through the cycles of income and production. Adam Smith explained their process as a complete mistake even though they are still being used in the economy. According to them agro production can bring more profit in the cost therefore the share of wealth depends on agriculture. So they oppose the mercantilists who believe in the increase in production and taxation. The advice collecting revenue from the landowners from the administrative expensive system of tax collection. Contemporary economists refer to the type of land tax as a constructive source of revenue tax.